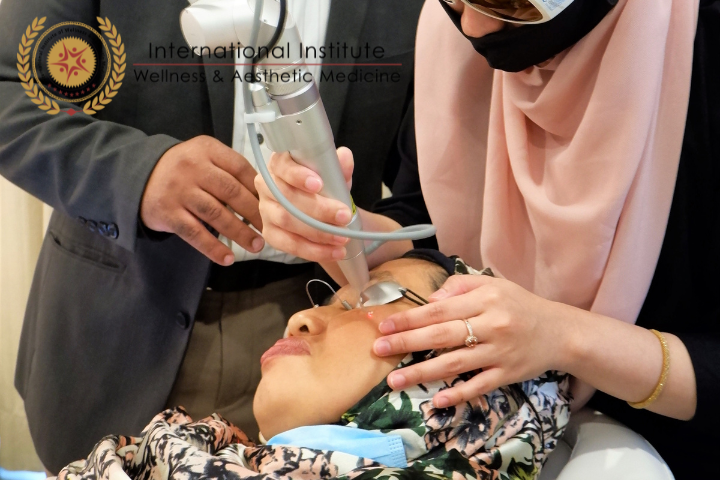 Scars are a very common complication caused by acne, burns, surgeries, and traumatic injuries affecting millions of people every year. The appearance of scars can be very disturbing to patients both physically and psychologically. In today’s time with technological advancements, laser scar removal procedure is the most common go-to procedure.

Under our advanced Medical Aesthetic Certification programme in Malaysia and our International Online Aesthetic courses, Aesthetic students are trained extensively on the application and benefits of various non-surgical laser-based scar removal procedures.

In today’s article, we will discuss the type of lasers used in scar revision for Asian skin.

There have been several advancements in the use of lasers for scars. Earlier, ablative lasers, such as carbon dioxide (CO2) and Erbium: YAG (Er: YAG) were used in the treatment of acne scars. However, due to the long downtime and high risk of complications, they became infamous. Thereafter, non-ablative lasers such Erbium Glass and NdYAG lasers were used to treat scars; they had less downline and risk, but the results were also inadequate. There are also pulsed dye laser lasers which were used in the treatment of hypertrophic and erythematous scars. Now with the advent of Fractional technology, scar removal with ablative lasers such as CO2 and Erbium YAG have become popular again.

How does Laser work?

Clinical effects of laser therapy are multi-fold depending on the type of laser and wavelength. However, Laser treatment for scarring works in two ways. First, heat from the laser works to remove a predictable, uniform thickness of the damaged layer of the epidermis. As this top layer of your scar peels off, a new layer grows to replace it. The skin will then appear smoother, and the appearance of the scar is less noticeable. Second, as the scar tissue breaks apart, heat and light from the laser also encourage new, healthy skin cells to grow from beneath. Blood flow is drawn to the area by the heat of the laser and provokes an inflammatory response in the scar area. This, in turn, results in the stimulation, development, and deposition of new dermal collagen and elastin, along with a reorganization of structural scaffold proteins and dermal connective tissue. This results in rejuvenation and thickening of the epidermis and an increase in dermal volume. In simpler terms, the new, regenerated skin makes the scar less noticeable than before.

What is a Laser-based Scar Removal Procedure?

With lasers, scars can be lessened significantly depending on their severity. There are various laser-based scar removal methods that are commonly used in aesthetic medicine. Here are the most common laser technologies that are currently used-

The Pulsed Dye Laser therapy is the common laser that is used for hypertrophic scarring treatment. Recently, the pulsed dye laser therapy (PDL) has been the go-to laser technology in many studies conducted to show expressive and long-term progress in hypertrophic scars. This laser targets the reticular dermis up to a depth of 1.2 mm. Vascular proliferation tends to play a key role in scar management. Following pulsed dye laser therapy (PDL) treatment the mast cell count or amounts of substance and calcitonin gene-related peptide (CGRP) is significantly reduced. Calcitonin gene-related peptide (CGRP) is postulated to be involved in several of the pathophysiological hypertrophic scar formation processes.

Ablative lasers are very powerful laser that causes coagulative necrosis of the cells. They are used to cut tissue and create a bloodless surgical field. They target the water chromophore and vaporizes the cells. These are two types of ablative lasers that are used for skin resurfacing - CO2 laser and Erbium YAG laser. The CO2 laser is a powerful ablative laser at 10,600 nm wavelength. As the name goes, the Laser medium is gaseous Carbon dioxide. The Erbium YAG (Er: YAG) laser is an ablative solid-state laser, whose lasing medium is erbium-doped yttrium-aluminum-garnite. Er: YAG lasers emit light with a wavelength of 2940 nm.

They are both powerful laser that denudes the epidermis via coagulative necrosis and replaces the scarred tissue with a new layer of healthier tissue.

There are several non-ablative lasers used in scar removals such as the erbium glass and NdYAG laser. Non-Ablative Lasers are used to heat the inner layers of the skin while leaving the surface untouched. This promotes collagen production and new skin cells that will replace the damaged scars tissue.

Fractional technology helps to reduce the downtime of ablative lasers and reduces the risk of thermal injuries, burns, and scars. Fractional resurfacing causes organized damage of tissue columns, also recognized as microscopic treatment zones (MTZs), without considerable collateral damage. The laser disturbs collagen fibrils that formed the scar, causing repair of scar regions in a more controlled fashion. Fractionated laser resurfacing procedure uses tiny beams of light that penetrate deeply into the skin. The result is dozens or even hundreds of microscopic holes where skin cells have been removed, surrounded by healthy skin. The holes help break down old skin cells while stimulating collagen production within the deeper skin layers. However, the main volume of the epidermis and dermis remains healthy, which helps in wound healing. The surrounding healthy skin helps to quickly heal the damage done by laser therapy. Over time, the scar appears less noticeable and the skin appears healthier.

Why is Training Important?

Though most people are of the opinion that lasers are very safe, the truth is laser procedures can be dangerous if administered incorrectly.

It is important for the aesthetic practitioners to be well trained in terms of the principle of laser, types of laser, laser techniques, depth of laser penetration, and laser-tissue interaction so that they are able to properly administer the laser treatment. Complications of laser include thermal burns which can be so intense to a point it may cause discoloration of the skin, scarring, infection, reactivation of herpes simplex infections, and even facial disfigurement. Thus, proper education is very important in order to not only avoid but also to teach them to manage these complications.

At Aesthetic Academy Asia, the aesthetic doctors & aesthetic dentists are intensively trained in theory as well as clinical skills under our advanced aesthetic courses in laser so that they can execute the cosmetic procedure, safely and effectively. Similarly, Aesthetic nurses, aestheticians, and spa owners are also trained to understand the basic principles of chemical peel under our cosmetology certification programme in laser

The advanced aesthetic courses in the laser curriculum include:

At renowned Aesthetic Academy Asia, may it be for students from the Philippines, Myanmar, India, Cambodia, Indonesia, or any part of the world, we take Aesthetic education with utmost seriousness and help our students learn and practice effective Aesthetic procedures so they are confident enough to start their career in Aesthetic. Our students are well versed to handle any situation, simply because we focus on teaching the fundamentals and principles of the Aesthetic procedures before venturing into clinical skills. Our students learn advanced and new skills and techniques that are different than the textbooks. We teach them safe, effective, and affordable ways to perform Aesthetic procedures. In addition to the Professional Diploma in Aesthetic Medicine for Doctors & Dentists and Professional Certificate in Advanced Aesthetic for Nurses, Aestheticians and Spa Owners, Aesthetic Academy Asia also conducts specialized and advanced training such as Non-Surgical Body Sculpting, Dermal Filler (Restylane, Juvederm, Teosyal, Bellotero), Botulinum Toxin (Botox, Dysport, Xeomin), Skin Boosters (Restylane Skin Booster, Profhilo, Rejuran) Platelet Rich Plasma (PRP), Threadlift (PDO, Aptos, Happy Lift) and more. Now with the current pandemic, the Academy is conducting online Professional Diploma in Aesthetic Medicine and online Professional Certificate in Advanced Aesthetic courses using state of the art virtual meeting technology.

The Academy has produced have some of the finest Aesthetic graduates in the world who have graduated from our professional aesthetic courses with dual international certificates.