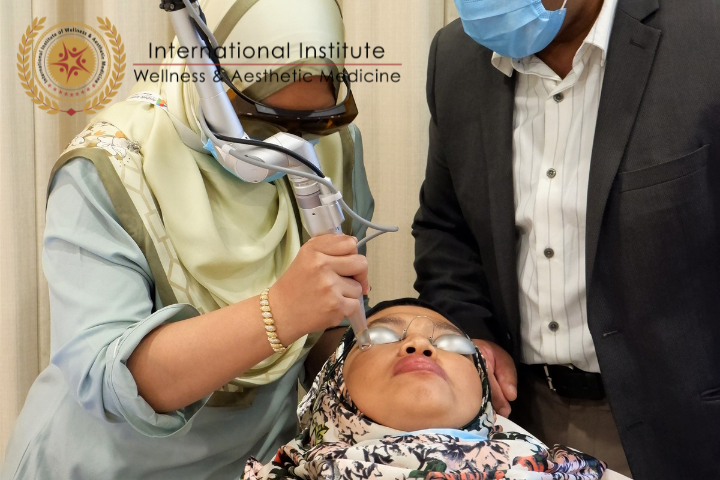 Pigment formation is highly complex. It is involved in inflammation, sun protection, and many other processes. Melanocytes in cooperation with enzyme tyrosinase are responsible for the production and conversion of dopa to melanin; melanosomes containing pigment are ingested by the keratinocytes, and the melanin is shed with the stratum corneum cells. Melanin production and skin color are affected not only by keratinocytes but also by Langerhans cells, mast cells, and probably by lymphocytes. Some of the most common pigmentation disorders include lentigines, post-inflammatory hyperpigmentation, and melasma. However, with the advancements in laser technology and aesthetic education, these skin pigmentation disorders are very much curable.

Under our advanced Medical Aesthetic Certification programme in Malaysia and our International Online Aesthetic courses, Aesthetic students are trained extensively on the application and benefits of various non-surgical laser-based cosmetic procedures for treating hyperpigmentation. When administered by a knowledgeable individual with proper training, the risks of laser treatments can be minimized while maximizing the benefits, which is what Aesthetic Academy Asia aims at. In today’s article, we will talk about hyperpigmentation, few common types of and the latest advancements in treating hyperpigmentation using lasers.

Hyperpigmentation is a common, usually harmless dermatologic condition in which patches of skin become darker in color than the normal surrounding skin. This darkening occurs when an excess of melanin, the brown pigment that produces normal skin color, forms deposits in the skin. Pigmentation disorders are the third most common among dermatologic disorders and cause significant psychosocial impairment.

Metabolic causes of hyperpigmentation may also include vitamin deficiencies, such as vitamin B12 and folic acid. Since diffuse hyperpigmentation may be associated with malignancy or may be improved through the treatment of the underlying disease process or insufficiency or elimination of the causative medication, it is important to identify the cause. The effective treatment of pigment disorders is characterized by the influence of melanin formation but must be always targeted to the other histopathological processes in the skin.

What are the types of hyperpigmentation?

These lines are basically normal color patterns seen in pigmented individuals. The difference between darker and normal pigmented skin can be found on the upper arm anteromedially, the posterior portion of the lower limb, the pre‐sternal area, the posteromedial area of the spine, and the bilateral aspect of the chest.

Hyperpigmentation at the extensor side of the joints

Stretching of the skin at the joints can possibly be a mechanical trigger for the melanocytes. The causation of striking skin hyperpigmentation over the joints can be an episode of inflammatory arthritis. The phenomenon may be related to increased vascularity over areas of subcutaneous cellulitis.

Periorbital hyperpigmentation is an extremely common skin condition that is characterized by dark circles around the eyes, often familial, and frequently found in individuals with dark pigmentation. Usually, hyperpigmentation starts in the lower eyelid during childhood and progresses with age.

Mongolian spots represent areas of dermal melanocytosis as a result of an arrest in migration of melanocytes from the neural crest to the epidermis. The grey‐black macular lesions may be solitary or multiple. The sacrum, buttocks, and back are the most common locations. These symptoms tend to fade in time.

Post‐inflammatory hyperpigmentation is one of the most common skin conditions. The dyschromia follows the pattern and distribution of the original dermatoses, but its intensity is not necessarily related to the degree of previous inflammation. Epidermal pigmentation is mostly brown and fades out in several months. Dermal pigmentation has a grey‐brown color and is generally permanent for years.

Ashy dermatosis or erythema dyschromicum perstans is a progressive pigmented disorder. The disease has been called ashy dermatosis because of its peculiar slate-like grey coloration occasionally demonstrated, in its beginning stages, by an erythematous raised border. The disorder is usually asymptomatic. Multiple brown‐grey macules and patches develop over the trunk and extremities. The face and neck, palms, soles, and mucous membranes are usually not affected.

Most melasma develops on the faces of some women who are pregnant or taking birth control pills. Other aetiological factors include genetic influence, exposure to UV‐radiation, phototoxic drugs, cosmetics, and anti‐convulsant. The usually symmetrical hyperpigmented spots are most prominent on the forehead, malar eminence, and cheeks anterior to the ears. Sometimes it affects the upper lip and the chin.

Nevus of Ota and nevus of Ito

Nevus of Ota (nevus fuscocoeruleus ophthalmomaxillaris) is a blue to grey‐brown pigmented patch located on the face, usually within the distribution of the ophthalmic and maxillary branches of the trigeminal nerve with involving of the sclera in some cases. The nevus of Ito is located unilaterally on the shoulder and neck. The macules are present at birth or soon thereafter. The start of puberty is likewise possible. The lesions look like Mongolian spots but are not self‐limiting. Malignant transformation has been observed in rare instances.

What are the new advancements in treating hyperpigmentation?

The CO2 and Erbium YAG Lasers

These are two other types of lasers that are also used for skin resurfacing, each with its own pros and cons:

Erbium YAG (Er: YAG) lasers are solid-state lasers whose lasing medium is erbium-doped yttrium aluminium garnet. The triply ionized erbium dopant (a substance added in minute amounts to another pure substance to alter its conductivity) typically replaces a small fraction of the yttrium ions in the host crystal structure, since the two ions are of similar size. The erbium provides laser activity in the crystal. Er: YAG lasers emit light with a wavelength of 2940 nm, which is infrared light used to treat hyperpigmentation.

The CO2 laser is a gas-state laser that emits photons at a wavelength of 10600nm and targets the water in abnormal collagen several millimetres below the skin surface. This laser system enables precise, efficacious, and targeted thermal action on the lesions treated while protecting the surrounding tissues, thus guaranteeing optimal re-epithelisation. The extreme precision of the application means that the epidermis alone can be vaporized, or the thermal effect can be extended even deeper into the papillary or reticular derma.

Q-switched Nd: YAG lasers target the endogenous melanin of the skin. The Q-switched device acts as an extremely high-speed shutter. It allows the Nd: YAG rod to store a large amount of energy and permits a single, high-energy, high-speed pulse to exit the cavity. It deposits energy in pulses in the range of nanoseconds. The beam can be made uniform or fractionalized. A fractional handpiece reduces the time the laser beam touches the skin and minimizes the damage in normal cells with a quick recovery time, as the laser’s energy is deposited on the skin surface in an interval pattern with islands of unaffected skin. Heat-induced steam cavities in the melanosomes cause the scattering of visible light, resulting in an ash white color at the site of treatment.

The Q-switched ruby laser emits a 694nm beam of photons, that is well absorbed by melanin and minimally by haemoglobin. It is highly effective for the removal of superficial pigmentations, lentigines, ephelides, and pigmented actinic keratosis as well as deeper pigmented lesions, melanocytic naevi, naevus of Ota, naevus of Ito.

Q-switched alexandrite laser emits photons at a wavelength of 755-nm, thus belonging to the near-infrared category of lasers. At this particular wavelength, the main chromophore is melanin, hence it is mainly used for hair removal and pigmented lesions. Since alexandrite has a similar wavelength with ruby laser, it shares the same pigmented indications; the longer wavelength allows a deeper effect on dermal melanin in fact its employment gives excellent results for nevus of Ota.

Picosecond alexandrite laser is a safe and effective modality for the removal of various pigmentary disorders. Its effectiveness results from a greater pigment fragmentation induced by deep shockwaves (photomechanical effect), while its safety originates from reduced and selective thermal damage (photothermal effect). As it targets the pigment through shorter picosecond pulses this kind of laser has the ability to achieve the same results as a Q-switched laser.

Intense pulse light therapy (IPL) which is also known as photorejuvenation or photo facial is a non-ablative (fractional) laser procedure highly effective for eliminating hyperpigmentation spots. During this process, hyperpigmentation is treated with powerful flashes of light in short, polychromatic blasts. The energy created by the light penetrates the dermal layers below the epidermis layer and begins to address the melanin that is causing the spots. The heat penetrates and attacks the pigment particles, breaking and destroying their bonds. The particles then rise to the surface and form as scabs, only to slough off, or are carried in the lymph and eliminated naturally by the body within a few weeks. Intense pulse light therapy (IPL) stimulates the development, and deposition of new dermal collagen and elastin, reorganization of structural scaffold proteins and dermal connective tissue, and regeneration of new keratinocytes, thereby reducing the hyperpigmentation condition of the epidermis.

Why is training important?

Though most people are of the opinion that lasers are very safe, the truth is laser procedures can be dangerous if administered incorrectly.

It is important for the aesthetic practitioners to be well trained in terms of the principle of laser, types of laser, laser techniques, depth of laser penetration, and laser-tissue interaction so that they are able to properly administer the laser treatment. Complications of laser include thermal burns which can be so intense to a point it may cause discoloration of the skin, scarring, infection, reactivation of herpes simplex infections, and even facial disfigurement. Thus, proper education is very important in order to not only avoid but also to teach them to manage these complications. At Aesthetic Academy Asia, the aesthetic doctors & aesthetic dentists are intensively trained in theory as well as clinical skills under our advanced aesthetic courses in laser so that they can execute the cosmetic procedure, safely and effectively.

The advanced aesthetic courses in the laser for treating hyperpigmentation curriculum include:

The Academy has produced have some of the finest Aesthetic graduates in the world who have graduated from our professional aesthetic courses with dual international certificates.