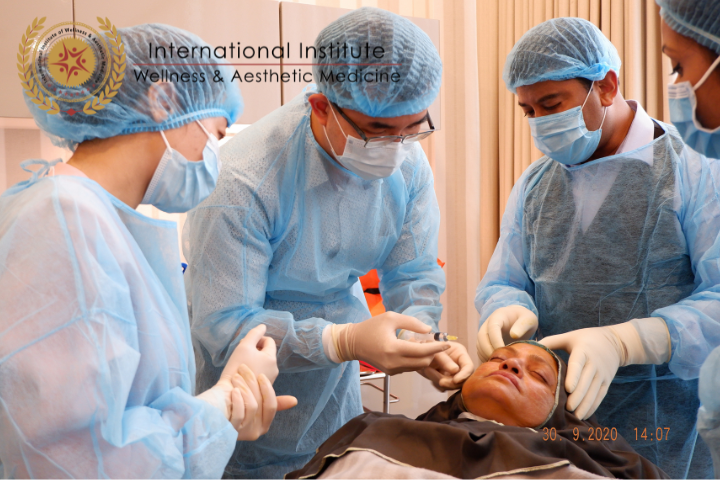 When it comes to non-surgical facelift, barbed sutures are the advanced and most popular technique to be used. Aesthetic doctors insert the barbed sutures into the face to create a lifting effect or a tightening and firming of the soft facial tissues. This procedure is useful to treat problems like flabby faces or aging signs around the mid-face, jowls, brow, and neck.

At Aesthetic Academy Asia, we train extensively on the application and benefits of using various nonsurgical facelift procedures including the barbed suture technology for a facelift and other purposes during our courses on Advanced PDO Thread Lift and Aptos Training.

In Malaysia, many people opt for Thread Lift treatment as it is a good alternative to get tighter and younger-looking skin. Hence, it is crucial for aesthetic medicine practitioners to possess complete knowledge and training about the techniques. At Aesthetic Academy Asia, we imbibe theoretical knowledge to doctors & dentists about Thread Lift procedures as well as clinically train them to perform the facelift technique using different procedures during our Advanced PDO Thread Lift and Aptos Training.

The use of a barbed suture for a non-surgical facelift minimizes the risks of cheese wiring and stress relaxation, facilitating the minimally invasive repositioning of soft tissue in the head and neck, as well as optimizing and enhancing traditionally long and potentially tedious procedures in body contouring.

The use of the barbed suture for lifting began with the antiptosis procedure using APTOS sutures. The APTOS suture, called Feather Lift, deployed a 15-cm segment length of dyed polypropylene suture with barbs cut at an angle in the suture and organized facing toward the midline in a bidirectional fashion. Both halves of the sutures had barbs pointed toward the middle. The Feather Lift approximated tissue but was not fixed to any stable craniofacial structures. APTOS sutures and the Feather Lift procedure were introduced into the worldwide market in the late 1990s by Dr. Marlen Sulamanidze for non-fixed soft tissue repositioning of lax, soft tissue elements.

APTOS suture was attractive to be able to offer patients a “noninvasive” approach to lifting ptotic facial soft tissues.

In a renewed effort to introduce barbed suture technology into the field of aesthetic plastic surgery, a clear, nonabsorbable polypropylene unidirectional thread with barbs arranged in a helical design called the Contour Thread was developed by Dr. Gregory Ruff, which was FDA-cleared for soft tissue elevation of the midface in 2005. The Contour Thread Lift suture was used and promoted principally for the closed soft tissue elevation of facial tissues. The purely closed Thread Lift technique was designed to be delivered percutaneously with minimal to no undermining.

The main advantage of Contour Thread Lift was that it could be fixed at the proximal end to a nonmobile structure such as the deep temporal fascia or mastoid fascia. Also, it was thought that having barbs along almost the full length of the suture eliminated cheese wiring, reduced stress, relaxation, and allowed for tension unloading.

The barbs face in opposite directions from the midpoint, the midpoint segment being approximately 2 cm in length, in the double-armed suture, and toward the fixation end (entry end) on the single-armed suture. On either end of the Quill SRS suture are fixation needles, and the Quill barbed suture comes in different lengths, absorbable (polydioxanone and monoderm), and nonabsorbable (nylon and polypropylene), different diameters, and with different attached needles. The advantages of multiple barbs along the length of closure include reduced stress, more relaxation, and cheese wiring effects with potentially more efficacious long-term closure of wounds under tension.

The introduction of any new procedures, treatment, or technologies usually happens in a cautious manner, with improved acceptance after initial skepticism. The use of Thread Lift for a non-surgical facelift is not exactly a new idea and has been there for around three decades. Barbed sutures are used as the method to achieve suspension and facial rejuvenation without surgery. New variations of barbed threads are being developed over time to give better results.

At Aesthetic Academy Asia, we take aesthetic education with utmost seriousness and help our students learn and practice effective aesthetic procedures, so they are confident enough to start their career in aesthetics. We have a faculty of globally renowned aesthetic doctors who are exemplary in their skills and knowledge with scientific excellence in Advanced PDO Thread Lift and Aptos Training. Know more about us at https://aestheticacademy.asia/