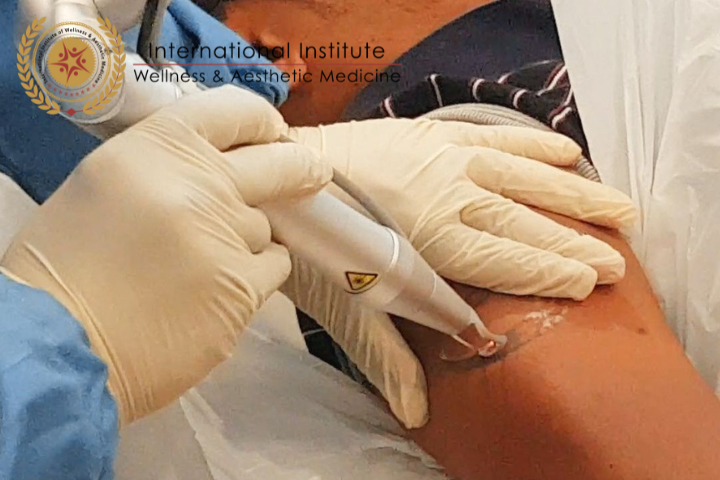 Tattoo regret is real and often with regret comes the desire for removal. Even though the tattoo removal technology has evolved over the years, it is still not 100% effective, even when done by experts. The current laser tattoo removal technique not only has around 90% efficiency, the procedures often leave behind numerous problems for people with different skin tones and skin types. At Aesthetic Academy Asia, we teach and train extensively on the application and benefits of lasers for different purposes in aesthetic medicine during our Advanced Aesthetic courses in Lasers. In today’s article though we will broach the subject on the use of laser for tattoo removal, where we will tell you two major problems that come with the current Q-Switch and Pico lasers used in tattoo removal and also tell you a little about the advanced technologies in laser treatment that have been developed for the purpose of tattoo removal, that actually addresses many critical shortcomings of the current widely-used Q-Switch and Pico laser technology.

The Q-Switched Laser is currently the most commonly used laser tattoo removal process by aesthetic practitioners but is highly inefficient because of two main reasons. The first problem that arises from this laser tattoo removal treatment is the intense heat generated when the laser interacts with the ink on the skin. This creates an instant explosion of steam vacuoles, both at the surface of the skin of the clients (visible as blisters and boils) as well as below the surface just above the macrophages. These vacuoles act as an additional shield, preventing the laser energy from reaching any more ink. Although the surface vacuoles dissipate within an hour or more, the deeper vacuoles below the skin’s surface persist for days, so additional laser passes in the same treatment session have no significant effect. Therefore, patients typically must wait 6-8 weeks for the vacuoles to dissipate naturally and for their skin to recover. Secondly, one may also risk hypopigmentation, where the treated skin turns paler than the surrounding skin due to the treatment, or hyperpigmentation, where the treated skin is left darker than the surrounding skin because of the laser tattoo removal treatment. However, there is good news on the technology front. There have been various innovations of technology, wherein the above-mentioned (and more) issues related to Laser-based tattoo removal treatment have been addressed!

The following are advanced laser technologies that are slowly replacing the current tattoo removal techniques. However, before venturing forward, it is crucial to understand that one needs to undergo proper clinical training and possess theoretical knowledge to work with lasers. Aesthetic Academy Asia’s Advanced Aesthetic courses in Lasers help you learn and understand the new technologies to efficiently execute the procedures. Now let’s learn more about the new technologies.

Among the various advances in the tattoo removal procedure, a silicone patch infused with perfluorodecalin (PFD), called the Describe PFD patch (Merz), is recommended. As said by Brian S. Biesman, M.D., an oculoplastic surgeon in Nashville, Tenn., who helped to develop the PFD patch and conducted pilot and pivotal studies on the device, “It minimizes the epidermal whitening effect, which allows you to do multiple treatments during the same session as opposed to only being able to make one pass and you’re done. Within a period of 5 minutes, you can make between 3 and 4 passes with the laser as opposed to only one,” Dr. Biesman tells Dermatology Times. “It also allows for the deeper transmission of light into the tissue, and it acts as a heat sink to help protect the epidermis.”

To minimize pigmentation from laser tattoo removal, hydrogel dressings on patients with types IV through VI skin can be used. During this process, laser treatment is incorporated with a precooled, non-stick clear dressing that is applied over the tattoo right before treatment. Hydrogel dressings could be used as an effort to avoid an overly brisk reaction, which could lead to dyspigmentation as hydrogel dressings allow easy, widespread adoption. Additional benefits of the technique include reduced laser-induced tissue splatter and increased patient comfort from the cooling effect, as suggested by renowned educational institutions such as award-winning Aesthetic Academy Asia in Malaysia with a team of skilled and well-renowned Doctors and Academicians who has scientific excellence in Advanced Aesthetic courses in Lasers.

Traditional laser removal techniques use a laser beam to break up clusters of tattoo ink particles located beneath the skin. The individual particles that are broken off, are gradually carried away by the body's macrophages vide phagocytosis. As a result, multiple sessions are required, as each pass of the laser removes only a top layer of particles from each agglomeration. It is not possible to remove any more than that in one session, as the particles that are released from the top of each cluster end up shielding the rest of the agglomeration from the laser beam. In addition, the laser is blocked by tiny steam-filled vacuoles (sacs) which form over the agglomerations as a result of the treatment.

The Rapid Acoustic Pulse (RAP) system helps to overcome these limitations. Immediately after an initial laser pass is performed, the handheld Rapid Acoustic Pulse (RAP) device is used to send acoustic pulses through the skin. This both removes the vacuoles and causes the ink particles to disperse. And as a result, multiple laser passes can be performed within a matter of minutes and in a single session.It can be said that proper laser courses and training is extremely crucial in order to execute the procedure and under proper conditions to avoid fatal side effects.

At Aesthetic Academy Asia, we take aesthetic education with utmost seriousness and help our students learn and practice effective aesthetic procedures, so they are confident enough to start their career in aesthetics. We have a faculty of globally renowned aesthetic doctors who are exemplary in their skills and knowledge with scientific excellence in Advanced Aesthetic courses in Lasers.